What good is a degree in theater? Is there really college magic? If that is where your passion lies a theater degree can be very good even if one never uses it for theater. Technically I didn’t directly use my bachelors degree for 30 years. But the experience did benefit me in oh so many ways. For me its was true college magic. Not the kind that some magicians specialize in but the kind that had a true magical effect on my life. Learning to work the system was the first step.

I finished my first season of the Magic of Safety show with a new passion to return to school. Suspended for one year from CU Denver I decided to start fresh. Even on the first go around I knew that I wanted to major in theater. My year there taught me CU Denver Center was not the place to do it. Their fledgling theater department was just starting and I felt I needed more. I looked at CSU, after all that is where I had just experienced a life changing event hanging with my friends and they did have a theater department.

It was my sister Julie that recommend the University of Northern Colorado (UNC) located in Greeley, Colorado. No really Greeley, Colorado. Mainly known as an agricultural community of around 50,000 people in the 1970’s Greeley was also the home of the Monfort Meat packing plant. With a pungent aromatic odor Monfort had a large feed lot 10 miles east of town. The University educated 12,000 students at a school known for it’s teaching and nursing school. It also had a very good theater program. Julie had been performing in high school theater and her drama teacher Jim Hunt recommended UNC home of The Little Theater of the Rockies. That was good enough for me. Jim had attended Northern Colorado and I had a lot of respect for him. Now the problem was how to afford it.

As the school year was winding down I found myself facing a 3 month layoff. Well known around AAA word got back to me that the travel department at AAA was looking for a seasonal employee. Inspecting and rating hotels, motels and restaurants that are listed in the AAA travel guide was the focus of the job. All of my expenses were covered even meals. In fact I was encouraged to eat at AAA approved restaurants. Most of these were steak houses and I was encouraged to eat the steaks as they were the best way to judge the chef.  There was one more perk that turned out to be a really big deal. I was paid a commission for selling ads in the guide. This was a highly effective combination. A guy who had never been particularly good at saving money now had a clear goal and enough money that saving was much easier.

but how should I get back in the loop? Now I needed to perform some real college magic. First, I needed to avoid math after all I graduated from high school 4 years earlier. I needed a school that required science OR math. Science always interested me, especially science that didn’t require math. Of course there was also my German problem. if I was going to have to take German on a grammar level and not just learn the language this too was subject to be avoided.

After much research I found out that UNC would consider all my basic education requirements filled if I received an associates degree from Red Rocks Community College. Not only did they have a small theater department, they fulfilled my other requirements. In addition I already had one year of school at CU Denver Center so I could fulfill my associate requirements in a year. I enrolled in Fall of 1975 and attended might classes while performing the Magic of Safety during the day.

Now I just had to do it. Everything is a learning experience and classes at Red Rocks not only provided academic education but also life education.

College Magic: Working the System is part 5 in My Magic Journey series. If you want to catch up here are links to the other posts: 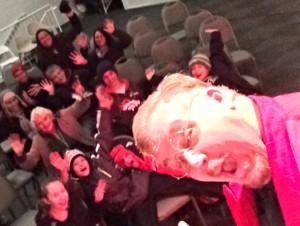